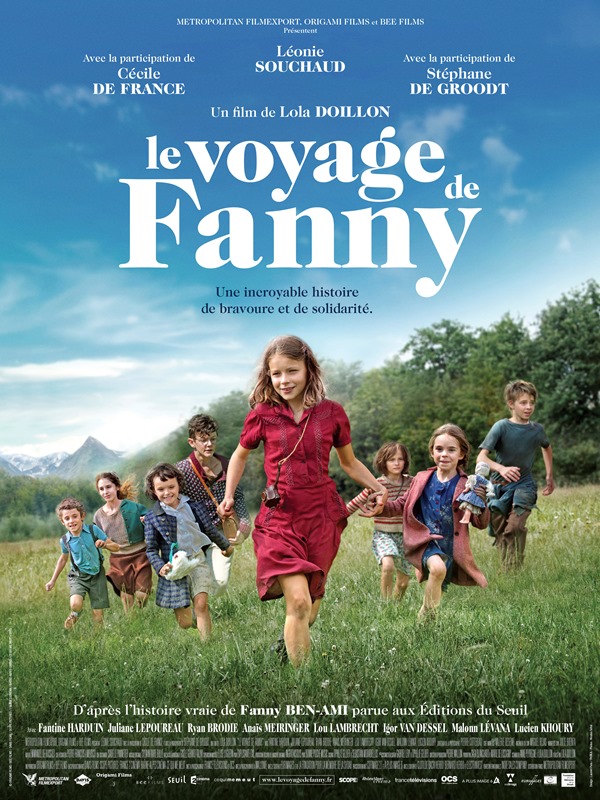 In the Tel Aviv airport departure hall, Fanny (83 years old) says goodbye to her daughter and grand-son who dropped her off. She's leaving for France, more specifically the Creuse region, which is hot and sunny, even in late summer. A taxi drops the old lady off near an overgrown path where she bumps into a 9 year old girl who, despite the season, is warmly wrapped up. The little girl leads her to a snowed-under park where, after a few turns, she finds a large house.That's when Fanny starts travelling back in time. Indeed, when entering the large dining hall, the old lady recognises among the hundred or so children aged between 3 and 17, her own two little sisters, Erika, 6 years old, and Georgette, 3 years old. As for the little girl who led her there, she's no other than her younger self, in 1940. This place, an OSE house (Children's Aid Society) located in the Free Zone, is where their mother sent them so they'd be safe from the Nazis.As the months go by, Fanny, a pale little Parisian girl, gradually turns into a true country girl - tanned, strong and audacious. She always protects Erika, who is timid, whereas Georgette, being inquisitive and lively, takes refuge in her imagination. The war still seems like a distant thing, until the Germans invade the Free Zone in November 1942. But when the new village priest reports the small colony, the children are sent away in groups to a number of different houses. The three sisters must flee to the Italian Zone.As for Fanny, she has to say goodbye to her friend Helga and to Ethel, the guardian who used to supervise the children and with whom she's developed a deep friendship during those two years. Fanny has a hard time adjusting to their new "home" in Mégève and its Head, Madame Cellier, even more so as their mother suddenly stops writing them letters.Yet life goes on, and Fanny discovers new emotions, as she becomes fascinated with Elie, a handsome, cheeky and charming young man of 16 whom she's helping in the kitchen. When she's with him, Fanny feels nothing can happen to her. But the fall of Mussolini in July 1943, and the threat of a German invasion in France of the Italian Zone, forces them to evacuate the children secretly, and as a matter of urgency, to Switzerland. Luckily, Elie leads the group! Imagine Fanny's bitter disappointment when the young man, overcome by dread when seeing French policemen and German soldiers walking onto the platform, abandons them at the station... Following Elie's desertion, Madame Cellier has no other choice but to entrust Fanny with the responsibility of leading the group. At first, she refuses to shoulder this burden, but in light of the circumstances and the other children's vulnerability, she finds she has to accept.This marks the start of many a journey for Fanny, who tries as best she can to save these children from the Germans, using all her cunning...

The involvement of scope

SCOPE Pictures installs cookies on its websites to ensure their proper working, improve your surfing experience, analyze use and adapt their contents according to your areas of interest. Click on “ I understand” to accept cookies and access the site or click on “Learn More” to set your cookie preferences. Please note that blocking certain cookies could hamper the proper working of the site.

Analysis of anonymous use of the site

These are indispensable to the working of the site and are automatically active (ex: Login information). They allow to establish anonymous statistics on the use of the sites. You cannot disable these cookies.

Analysis of non-anonymous use of the site

Thanks to these cookies we are able to collect and analyze personalized surfing data. No information whatsoever is shared with third parties.

Thanks to these cookies, we optimize your surfing by displaying information relevant to your interests on this site.

These cookies are used to display relevant advertising of our products on our partner sites or on social media networks.